David Bogie returns to the Prestone MSA British Rally Championship with CA1 Sport in his freshly-liveried Skoda Fabia R5 in 2017. The popular Scot recently won the opening round of the MSA Scottish Rally Championship and is up for the fight for BRC laurels as he bids to take his second British premier rallying series title.

Bogie had a mixed 2016 by his high standards, taking two podiums on the Tarmac of Northern Ireland but seeing mistakes and reliability woes on his preferred gravel surface dent any championship aspirations. The Fabia R5 driver notched up seventh in the overall standings – a position that did not reflect his true overall pace and commitment.

“I learnt a lot from 2016 and can take a fair amount of positives from last season,” explained Bogie. “We could have taken a podium on nearly every event but rather than settle I pushed for wins, which on a few occasions didn’t pay off. By the end of the year I felt comfortable with the car, was working well with the new team and had got to grips with the new-look championship.”

A new year heralds a new colour scheme for David as the striking white-and-orange liveries have been replaced by a stunning cool blue and ice white, which made its debut on the Snowman Rally last weekend – an event Bogie convincingly won as he flexed his BRC title muscles. The rest of the package remains, and the Dumfries star is hopeful he has all the right ingredients for a successful campaign.

“Preparation has been good,” reported the Scot. “The result on the Snowman was really positive as we dusted off the cobwebs and tried the new DMACK tyres. It’s good to be back with CA1 and to have Kevin [Rae] back is very important.

“With the combination of the Cambrian being cancelled and our pre-event test being icy, we didn’t learn much that weekend, so instead we are looking at entering the Malcolm Wilson Rally. More seat time would be great and it’s close for the team geographically so makes sense to go and do – especially as it’s only a week before the first round.”

The CA1 Sport driver has a wealth of experience of events around the UK but still gets excited at the prospect of a new year of competition.

“I have quite good knowledge of the opening rounds, and all three are events I have won before and are very important for our title aspirations,” he said. “The first three events really suit us and we will be pushing for wins, which will hopefully set us up for the second half of the campaign.

“All of the events are good rallies, but I cannot wait for the opening round. It’s quite close to me, but it’s one of Kevin’s home events as he grew up watching it as a boy. To have the championship start in Scotland is fantastic and the excitement will be high for round one once again, this time with plenty of home support!”

The opening round of the BRC gets underway on 17/18 March with the eagerly-anticipated new Brick & Steel Border Counties Rally getting the new season underway. Bogie will be flying the flag for Scotland and will be out to claim a home win on round one. 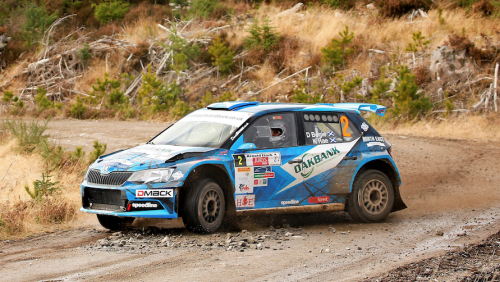