Bogie leads the way into the final day

After clinching the first round of the Dayinsure Wales Rally GB double-header, David Bogie picked up where he left off, with the Skoda Fabia R5 driver leading overnight going into the final day of the season.

With the pressure off, Edwards was on a charge on the opening loop and initially led but with a puncture and an overshoot in the afternoon, it dropped him behind Bogie heading into the final day.

Rhys Yates and Elliott Edmondson were holding third before an off mid afternoon forced them into retirement. Thankfully both crew members walked away unscathed. Alex Laffey and Patrick Walsh now hold third overall and have just another five stages tomorrow separating them from their best BRC result yet.

In the Prestone MSA Motorsport News Junior BRC, Steve Rokland controlled the morning loop of stages but had to nurse the Peugeot 208 R2 through the afternoon with overheating issues and a puncture. Title rival James Williams also had a trying day as the young Welshman had his fair share of issues, including a puncture of his own and now sits in third. The two will now go head-to-head for the title with the winner being crowned in Llandudno tomorrow afternoon.

Kevin Horgan had a disaster on the first round of the weekend, but was flying in his Skoda Fabia R2 today and now holds his best BRC position with a fine second in the Junior BRC heading into Sunday.

In the Cadet Cup, there was carnage aplenty. Finlay Retson retired from the lead early on with suspension woes while Bart Lang rolled mid-morning. Coming out of the carnage to the Newtown Regroup were Jordan Reynolds and Johnnie Mulholland.

Reynolds initially held the lead but with a weakening rear beam, he tried to nurse the car through the afternoon set of stages but to no avail. Mr Consistent Johnnie Mulholland inherited the lead and is just five stages away from class victory.

Spencer Wilkinson and John Morrison have been enjoying their Wales Rally GB experience and lead the Production and National Cup’s respectively.

The final five stages will see three forest tests and two flat-out blasts across the Great Orme and into the heart of Llandudno town centre. 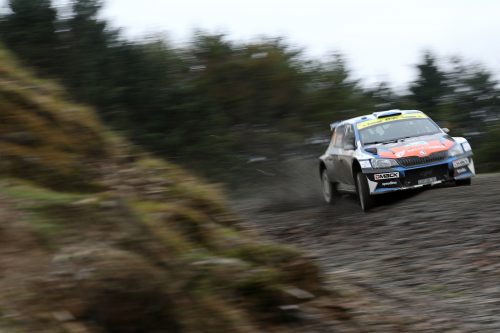