The rapid 23 year old from Armagh will switch from the closed-roads of the Irish National series to the BRC after acquiring a gravel kit for his Toyota and will tackle the National section of the series which caters for cars outside of the homologation required for the BRC classes.

The National and Border series Junior winner is a familiar sight on the Irish lanes, often producing crowd-pleasing performances in his Starlet but was eager to pursue a new challenge in 2021.

“We were looking around for a championship to get stuck into this year as there isn’t much progress back at home and the BRC really fitted with work and what I wanted to do” says Black.

“I’ve spent most of my career on tarmac but bought a gravel kit last year and recently upgraded to two-litre so really want to get stuck into gravel and tarmac events in it and stretch its legs. We will start our season at the Nicky Grist but I`m looking forward to the challenge of the year ahead”.

Black has spent his full rally career in the Toyota, only briefly flirting with a Peugeot 208.

“I was shortlisted for the Billy Coleman Award and had eyed up some events in a Peugeot 208 but had a huge testing crash after something snapped and both Karl and I broke our backs. It put us out of action for most of 2019 and of course COVID meant we didn’t get out very much in 2020 either”.

“This year wont be too serious for me really. Of course I want to do well but it will be great to gain experience outside of Ireland and new events too. I haven’t competed in the dark yet so the Trackrod Rally Yorkshire will be very different for me. The Ulster Rally is based only twenty minutes away from me so I`ll feel much more at home there, but I`m excited to get underway in Wales in July”. 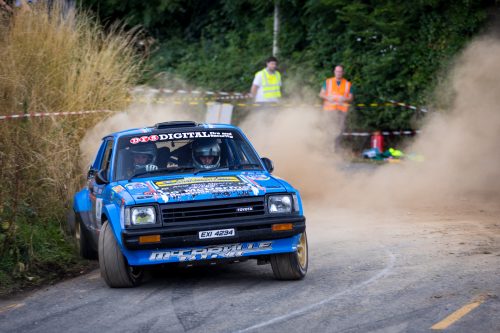