Rising 19-year-old rally driver Ruairi Bell will drive an M-Sport Ford Fiesta R2 in the opening round of the Junior British Rally Championship (JBRC) this weekend after closing a deal to drive an EDSL Sport run machine on the Cambrian Rally (16th February).

Bell, from London, will mount an assault on ultra-competitive Junior BRC and compete for a prize worth over 60,000 Euros towards a season in the Junior World Rally Championship in 2020 which has been provided by M-Sport and Pirelli. The youngster has enlisted reigning British Rally Champion Darren Garrod to co-drive for the season.

Despite briefly starting his rallying career in the UK, Bell has spent most of his competitive outings in mainland Europe, contesting the Latvian and Estonian Rally Championships. Thanks to a lower minimum age to contest rallies in the Baltics, Bell has been competing in full events since his 16th birthday, honing his skills behind the wheel of an older generation Ford Fiesta R2.

Despite brief outings in events in the UK and Ireland, the progressive youngster retained his European ties throughout 2018, even contesting two Latvian Junior events this year. Now, thanks to the experience built overseas and the impressive prize structure on offer for the JBRC, Bell looked to contest the JBRC and negotiated a deal with the official M-Sport Fiesta R2 reseller EDSL Sport to ensure he could contest the season opener.
Bell will drive the latest specification Fiesta R2 which have seen a complete overhaul from previous models. Backed by leading temporary protection experts Protec International Ltd, he will join some of the most competitive Junior drivers in Europe to bid for the coveted British title. But Bell is eager to try the new Fiesta out for the first time and get stuck into the forests made famous by Britain’s round of the World Rally Championship, Wales Rally GB.

“I`ve done 15 or so events in a Fiesta R2 now so I feel very at home behind the wheel of one, but I`m well aware that this weekend will not only be a very different car to what I`m used to, but the stages and event will be too,” said Bell.

“I’ve never competed in this part of Wales before so I`ll be starting with a very clean sheet. The recce will be the most important part of the weekend I think and that will really be my chance to build some knowledge of what is to come on Saturday. Hopefully, we will get a short test in the car before the rally to settle in and see just how different it is to drive from my old Fiesta. I will have over 200 brake horsepower at my disposal which is much more than the 1600cc Fiesta, so there is certainly potential in the car, I`ll just need to learn how to use it.”

Just hours before entries were due to close for the North Wales based event, Bell was able to secure one of the Hampshire firms 2019 specification Fiesta R2 which arrived at EDSL Sport on Friday from the factory in Poland. Team Manager Alex Waterman is delighted to see Bell competing this weekend.

“M-Sport and Pirelli have put together a really strong package for the BRC Juniors this season and EDSL Sport were very eager to get a rapid youngster in the car and showcase them in the championship,” he says.

“When Ruairi got in touch, we worked hard to find him a seat and the brand new M-Sport Fiesta was the perfect match for him. It’s great to have a British Champion in the team in Darren (Garrod) as well, as we will certainly be learning from him as we progress this season too. Along with Jordan Reynolds and Peredur Davies as stablemates, we feel we have a very strong team to fight for the Junior title. It’s going to be a busy but important season for us”.

The Cambrian Rally is the first of seven rounds in the British Rally Championship, which will take crews into the forests of North West Wales for over 50 miles of competitive driving on Saturday. 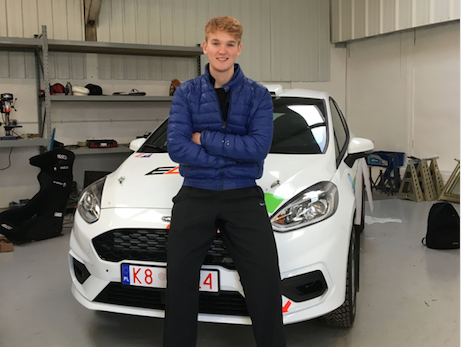