British Rally Championship newcomer Ruairi Bell is loving his first foray into Britain’s premier rally series, as the London-based star leads the Fiesta Trophy standings after the opening four events. With two rounds to go, the lucrative M-Sport and Pirelli 60,000 Euro prize is up for grabs for the Englishman, and Bell is ready to roll up his sleeves and fight for supremacy. We spoke to the Ford Fiesta driver ahead of the Today’s Ulster Rally.

“The BRC has been the best experience of my rallying life,” enthused Bell. “I have loved every second, the events are brilliant, and the competition is so strong and its just so enjoyable to be involved in. Even the first 4km of the Pirelli was great! Our off wasn’t so great however, and that’s something I would never do again! It has been a mixed season and we have had our bad luck and we have had good luck in spades at other times – that’s the nature of the sport.”

Ruairi has competed across Europe and despite hailing from Britain, the young-gun has found a second home in Latvia where the fast and flowing stages have given the Englishman plenty of time behind the wheel to develop sensational car control. Now competing in his domestic series, Bell is learning that the BRC is no walk in the park.

“The Cambrian was a real good round to start the year – using Wales Rally GB stages in a more compact fashion. The driveshaft going was a real blow, but you must park that event and always look forward. West Cork was perfect for that, the second day I really got into my stride and my confidence was high as we were taking it to the Irish guys. The times were strong and that’s when we knew our season could properly start.”

After a mistake on the Pirelli, Bell put in a strong performance to spray his first bottle of BRC champagne – and what an event to do it on, the classic Ypres Rally.

“It was great to get our first podium in Ypres but it didn’t completely go to plan, but that’s because I always want to be quicker and always want to be achieving more – same for most drivers I guess. There are two rounds to go and for me the carrot is the Fiesta Trophy prize. A top result in the juniors would be good but the likes of Josh [McErlean] and Will [Creighton] have driven really well and deserve to be at the top. I would like to have two clean drives and build a good set of notes and try and secure the Fiesta prize – I think that is completely doable and the rest will take care of itself.”

“I also have to say a massive thanks to Darren. He has really helped me build my confidence and provided so much knowledge – he has an answer for almost everything! As the current BRC champion, it’s brilliant to have him on my right as I know everything is taken care of, so I can focus on my driving. I hope we can put together two more strong rounds to push ourselves up the points table and secure the top Fiesta honour.” 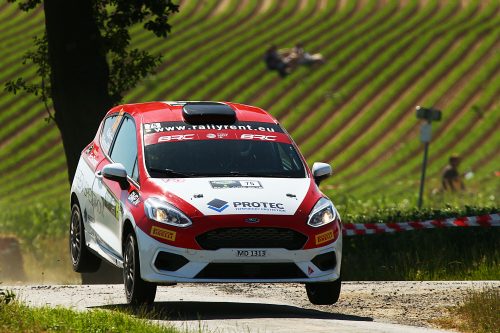