Bell, 22 from Blackheath is a previous winner of the M-Sport and Pirelli Trophy which ran as part of the Junior BRC in 2019 and victory enabled him to mount a campaign on the FIA Junior World Rally Championship in 2020.

After a progressive season on the World’s stage; securing a podium finish at the final event in Monza, Bell returned to the UK last season in a Rally4 Ford Fiesta, taking victory at the Nicky Grist Stages in the process.

Technical difficulties with the Fiesta ruled him out of the Junior BRC title chase and Bell wisely used the latter half of the season to revaluate his plans for 2022.

The progressive youngster acquired a Skoda Fabia Rally2 from mainland Europe earlier this year and will mount an assault on the full BRC title with the impressive machine backed by Inspira Wealth.

“Rallying is in an exciting place where opportunities are plentiful, and my goal is to maximise what lies before us to the benefit of the whole sport” says Bell.

“To unlock this potential, my ambition is to partner with people who share our passion for bringing new ideas to the industry – and are leaders in their field. By partnering with Inspira Wealth, BVNK, Near, SCB, Kaver, Pirelli, Speedline, C1-R and RallyCover, we are excited and able to achieve just that.”

“More than anything, this is an opportunity of a lifetime that will bring great challenges; but if it wasn’t challenging, where would the fun be in that?”

The opening round of the 2022 British Rally Championship takes place in Essex as the closed public lanes of the Corbeau Seats Rally Tendring & Clacton kicks off the series for the very first time at the end of April. 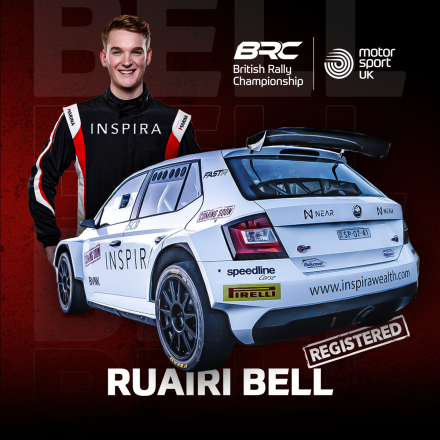