Back to the BRC: Marty McCormack moves to R5 mount

Marty McCormack will return to the MSA British Rally Championship for a full campaign in a Tiger Risk Skoda Fabia R5 for the 2017 season.

The Northern Irishman impressed in his older S2000-specification Skoda Fabia this year, tackling four rounds in the naturally-aspirated machine. Having recently acquired an ex-Neil Simpson Fabia R5, McCormack enters his third year with the Czech manufacturer and hopes the turbo switch will provide him with the perfect platform for an assault on Britain’s premier rallying series.

“Whilst watching Wales Rally GB, the Skodas looked very capable on the gravel and I was impressed with how they coped with the surface changes and the ruts,” explained McCormack. “I had several options on the table but I really wanted to continue with the Skoda brand.

“The BRC is where I want to be. To have Ypres included is fantastic, and the atmosphere from the championship is better than say the ERC. The events are great and the bite-size formats are good logistically making it good fun, yet a cost-effective championship to go and do. The competition was so strong in 2016 and if you want to win you have to be at the top of your game.”

Differential failure before the start of the Mid Wales Stages was a disappointing way to kick off last season, but the Ulster star shone on home soil, proving that in the right hands S2000 machinery can be a match for the R5 cars. Flying through the Tarmac lanes around Belfast, McCormack along with navigator David Moynihan led the event and enjoyed a day-long scrap with Fredrik Ahlin. All the good work was to be sadly undone by a fuel pump failure on the second day, however, putting an end to their giant-killing performance.

The 31-year-old bagged his first points on the Pirelli Carlisle Rally with a fine fifth, before repeating the feat on the Ulster Rally in August. Electing to play his ‘Joker’ on his home event, the Skoda driver doubled his points, elevating himself into the top ten in the overall standings in a superb ninth and ending the year as the highest-placed S2000 runner.

“2016 didn’t get off to the best of starts. We thought we had the car all set up nicely, so to have the differential fail on the Mid Wales knocked us back slightly,” recalled the Northern Irishman. “The Circuit was fantastic – the fast and open stages in the wet really created a level playing field and to lead the event was brilliant.

“To have fuel pump problems was hugely disappointing and our heads went down but after a solid finish on the Pirelli, I felt good again as we showed we have the speed despite being in an underpowered car. That was a massive disadvantage on the gravel especially.

“I thought we could do the same on the Ulster as we did on the Circuit but after the recce, the stages were a lot slower with more junctions so I just had to go and get a solid finish. It was from that moment I had to look at an R5 machine for next year.”

McCormack will undertake a rigorous pre-season testing programme which will include several gravel events including the Llandudno-based Cambrian Rally as the Draperstown driver looks to get to grips with his new mount.

“It’s hard to know at this stage as we don’t know who will enter the series,” he said, “but podiums are the minimum and after a round or two wins have to be the target. “ 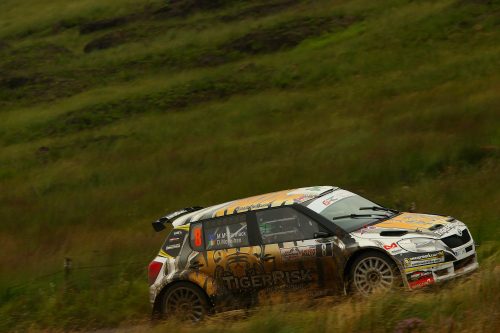