The MSA British Rally Championship’s title partner Prestone has recently been awarded the Auto Express Best Buy Award for the best screenwash on the market in 2017.

The leading antifreeze and coolant manufacturer came out on top in the Auto Express awards, receiving a maximum five stars in the recent standings. The influential motoring publication undertook rigorous tests to put the Prestone product and its rivals through their paces – including a freezing aptitude as well as bug and oil windscreen removal exercises.

The Prestone screenwash lasted 150 minutes in the deep freeze, backing up claims that it ‘excels in extremes’. In addition to as working in sub-zero temperatures, it made light work of bug removal and made serious progress on the oil and grease.

The Prestone screenwash is a winning formula for any motorist or rally fan alike. In the winter, it makes light work of ice and snow while in the summer it removes dirt and bugs fast, preventing dangerous sun dazzle. The new streak-free formula keeps your car smart, and the easy-to-pour bottle keeps you smart while you top up – avoiding any spillages or splashes.

Not only does it top the table in terms of superiority, it is also better for the pocket, coming in at a modest £4* per bottle – half that of its nearest rivals.

Head of Marketing at Prestone, Claire Fenton said: “Being recognised as an Auto Express Best Buy 2017 is a great result for Prestone. Our Extreme Performance Screen Wash is designed to excel in extremes and it’s brilliant to see that it stood up to the magazine’s rigorous testing”.

We are delighted for our friends at Prestone on the award. Need a new screenwash for the summer ahead? Look no further than the products in yellow.

* Price may very depending on the outlet. 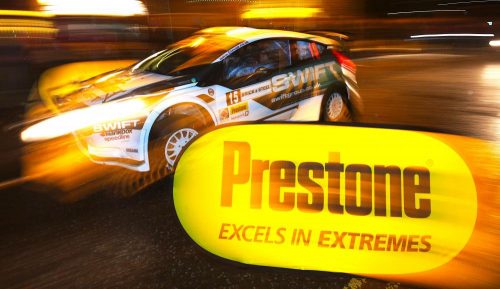