Our second Australian Rally Driver, Rhys Pinter unfortunately endured another frustrating event on the Pirelli Carlisle Rally, round three of the MSA British Rally Championship. Rhys was out to prove what he is capable of and to hopefully secure funding for further championship rounds.

With British co-driver Phil Hall sat alongside, the crew went about finding their class winning form they managed at Rally Australia as part of the WRC last year. The Pirelli Carlisle started off with an encouraging top ten junior time, despite a game plan of going in easy to begin with.

A locked rear wheel halfway into stage two sent them careering into one of the infamous Kielder Forest ditches. Despite losing ten minutes extricating the car, they were determined to stay in the rally and fight for those all-important DMACK Junior BRC points. With any rally, it isn’t over until the very last stage.

“We managed to get back to service where we looked at the car and got it going again. Unfortunately we had more dramas when we turned up to the time control we had a flat tyre, which meant we lost a bit of time changing it!”

Stage three was better for the pair, as they settled into the groove, with Rhys flying in his Ford Fiesta R2, catching the cars in front, until another puncture slowed their progress yet again.

The last stage of the day was by far the most challenging for Pinter and Hall, as a third puncture caused by a locking rear wheel meant the pair had to slow to a crawl for the final few miles.

“It was such a positive day despite everything being thrown at us, we had punctures, breakages, got stuck and yet still finished the day.” said an upbeat Rhys.

Coming into the final day the pair had a different approach – to enjoy the day and pull some positions back. Starting 10th in class the drama started even on the first road section with the rear wheels locking causing major handling problems. Despite efforts to solve the problem by the crew, the rear wheels locked again mid-stage and the pair were passengers straight into another ditch – this time irretrievably.

“It was so frustrating and disappointing, we were having another good run and again something out of my control has caused another DNF”.

Co driver Phil Hall comments; “This Rally is notorious for its demanding nature, and we’ve had every bit of it. It’s unfortunate how things worked out. Just as Rhys was getting a good flow on, something else would knock us down – but that is rallying. If nothing else I hope we’ve proved our dedication and determination to succeed.’

Spectators, marshals and Pirelli Carlisle officials where thrilled to see the Australian in action as he was one of the most committed and spectacular through the Cumbrian stages.

Due to the retirement, this looks like Rhys’ last foray in the British Rally Championship for 2016 at least. Pinter will now return to Australia to test a few four-wheel-drive cars and potentially run one at a local rally before deciding on further plans.

He will be back behind the wheel in his own Fiesta R2 at his home WRC round, Rally Australia later in the year as he looks to emulate his class win from last year.

We hope to see the likeable Aussie back behind the wheel in the BRC very soon. 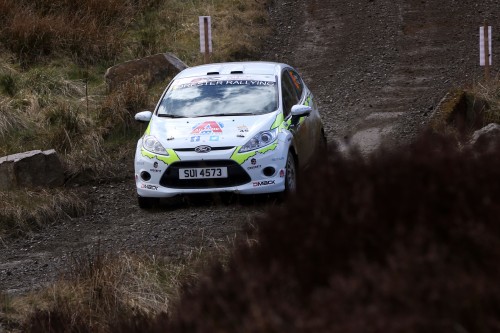