After taking two titles in his Subaru Impreza in 2014 and 2015, White will make the switch to two-wheel-drive and Britain’s premier rallying series this season, co-driven once again by son Matthew. The series kicks off with the Brick & Steel Border Counties rally in Jedburgh on 17th/18th March.

The 52-year-old Managing Director from Barnsley will need to adapt quickly to his BRC campaign, with the seven round series consisting of both a gravel and asphalt surface. Whilst White may be all too familiar with a sealed surface, the forestry stages provided by four rounds of the championship will be a relatively new experience for the duo, having only contested two loose surface events as a warm up for the season ahead.

Running under the Two 4 Motorsport banner, White will be aiming to mix it with some of Europe’s hottest talents in the BRC4 class of the series which caters for two wheel drive up to 1600cc machines. A far cry from the all-wheel drive Impreza White has used with great success over the past four years, the asphalt ace has been impressed with the M-Sport Fiesta during his outings in the car at the beginning of the year.

“Of course the Fiesta is a totally different animal to the Subaru I’m used to but it’s a fantastic car and I`ve settled in really well,” says White. “We have done four events in the car now on both surfaces which has resulted in a class win and finishing inside the top 10 on two occasions. I know that the BRC will certainly be a lot tougher than the single venue’s that we have used as a test bed for both and whilst I`ll still be learning all the time, I’m certainly comfortable pushing on from the very first stage.”

White has a busy year planned, but focusing on the British Championship is an exciting prospect for the Yorkshireman. “The BRC is really the ‘must do’ championship right now and with the loss of the asphalt series in 2017, we looked to see what else we could do with the Subaru. It soon became apparent that we needed to look elsewhere and we acquired the Fiesta to try our hand at the BRC”

“It has everything we love in rallying” he continues. “The Border (Counties Rally) kicks off with night stages in the forests which will be a new but exciting prospect for us. Once we have settled into the gravel, the series switches back to asphalt and whilst I may feel a little more at home on that surface, it starts with a trip to Ypres in Belgium so it won’t be a simple transition. But I really do enjoy the challenge and unknown of the season ahead. I’m looking forward to seeing what we can do. ”

White also has plans to contest selected events of the FIA World Rally Championship this season. But for now, he is concentrating on the opening round of the BRC which takes place in the forests south of Edinburgh in the Scottish Borders next weekend. 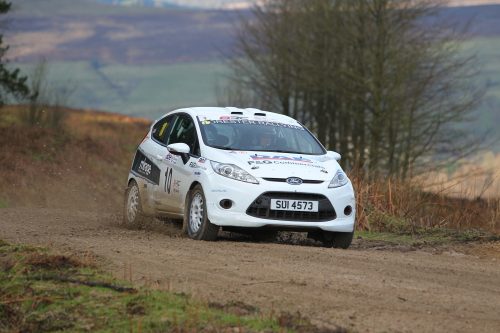