Rising Scottish talent Fraser Anderson will make the step up to the British Rally Championship Academy Trophy in 2021 in a bid to secure a prize fund worth £6,000 to contest the Junior BRC in 2022.

As one of the youngest drivers in the BRC, the 18-year-old from Helensburgh will pilot a Ford Fiesta R2T backed by Baxter and Gillespie with support from two-time British Rally champion Matt Edwards. Anderson will contest his first-ever mixed surface championship, having progressed from the Junior 1000 Ecosse Challenge and a small selection of gravel events in 2020.

“I always planned to do the British Rally Championship,” says Anderson.

“It’s been on my radar pretty much most of my career and although the Junior BRC was really the goal, when I saw the BRC Academy Trophy I thought it would be a better proposition and offer realistic competition in a season like this”.

Despite an impressive list of events as a Junior under his belt, Anderson has no family history in rallying and discovered his passion for the sport after a session at Knockhill Race Circuit.

“I had a very keen interest in cars at a young age so that led the family to take me to races during the holidays. I always wanted to be a GT driver to be honest, but after a driving experience the instructor said I was pretty good and I started off heading down the Junior 1000 series route but that was a tough introduction to rallying for me.”

The Citroen C1 used in the series proved problematic and Anderson felt he could do much better in different machinery. After a partial campaign in 2019, he was offered a test in a Fiesta R2 run by BRC ace Matt Edwards.

“It was an amazing opportunity and I really felt at home in the Fiesta, much more than the Citroen. Matt [Edwards] was impressed with my driving and offered to run the car for me and that started the relationship with him really.”

His first gravel outing came at the 2020 Cambrian Rally and first behind the wheel of the Fiesta, and despite a puncture and subsequent wheel issues, Anderson’s pace was encouraging.

“We set the fastest time in the R2 category on only my second ever stage on gravel so I knew that the speed was there. I was struggling with the provided route notes and came unstuck on the Malcolm Wilson when it really didn’t flow for me. It was always going to be a learning year and then COVID-19 struck which didn’t help.”

Upgrading to the newer Fiesta R2T saw Anderson secure a sensational third overall at the Rali Adfer Coedwigoedd Cymru test event, finishing just behind Elliott Payne in the more powerful Fiesta Rally4. Despite running the older Fiesta, he is eager to see his pace during the season.

“I can’t wait to get going in the Academy, it will be great to have a fair crack at a championship. I`ll certainly be looking at getting near to the pace of the Juniors and I`m confident that making my own pace notes will help. I did struggle with the way organisers route notes are made.

“Oulton Park is a good start as I have circuit experience from the Juniors. But I need to get the rust off first as it’s been a long time away from asphalt and Oulton Park will be a kind introduction to the series, to be honest. The Nicky Grist will be where the pace will finally begin to show. I’m looking forward to that for sure”. 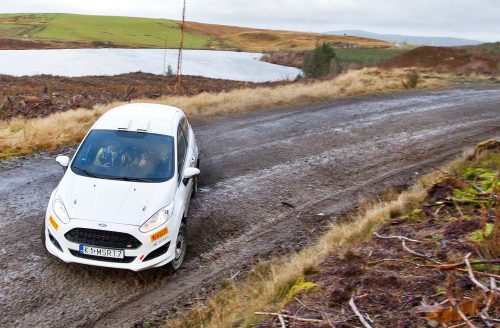