Nineteen-year-old Scottish rally driver Fraser Anderson will tick a long-awaited box in his motorsport career this season as he contests the Junior British Rally Championship in a Ford Fiesta Rally4.

Anderson, from Helensburgh near Glasgow will step up to the hotly contested Junior series after a tricky debut in the BRC during 2021 which saw impressive raw pace interlaced with misfortune and technical issues.

Last season, he contested the Academy Trophy in a Fiesta R2T and was well in contention for the title. However, a handful of non-finishes put the youngster on the back foot and with engine issues during the Mull Rally shakedown, his title bid was over.

Now, Anderson and co-driver Sinclair Young will step up into the latest generation Rally4 car from M-Sport Poland and will make a bid for a sensational prize drive in a round of the World Rally Championship in 2023, driving a Hyundai i20 N Rally2 thanks to support from Hyundai Motorsport Customer Racing.

“Our pace within the Academy was very solid, we essentially won every single stage that we did competitively and took the win by over two minutes on the Nicky Grist Stages. Unfortunately, a number of technical issues and admittedly a couple of mistakes on my part made the season quite tricky. We decided to take a step back and reorganise for the future. I’m hoping that the move to the Rally4 will rectify the technical issues we had last season and I’m coming into this season with a more measured approach, you could say my head is a bit more `screwed on`.”

Wise words from the rapid youngster who has a grounded rallying career having started in the J1000 Ecosse Championship, winning two out of the first three rounds in only his second year. A prodigy of three-time British Champion Matt Edwards, Anderson progressed into the Academy before acquiring former Junior driver Finlay Retson’s Rally4.

“At the moment I am still learning the new car, and after a long hiatus on tarmac I’m looking to improve my pace on the sticky stuff as well” he continues.

“The competition will be as fierce as always, especially against the Irish guys on tarmac. The unique thing about the JBRC is that there are no real weak links so you always must be at your best, or someone else will capitalise and take advantage of the situation. So, I expect the battles to be as hot as ever.

“It’s hard to put into words how excited I am. When I first started in the Junior 1000 Ecosse championship, the Junior BRC seemed like a distant dream, that I was never quite fully sure that I could achieve. I don’t come from a rallying family with barrels of cash, so to be here is quite literally a dream come true for me and I am eternally grateful to my sponsors and family for this incredible opportunity.” 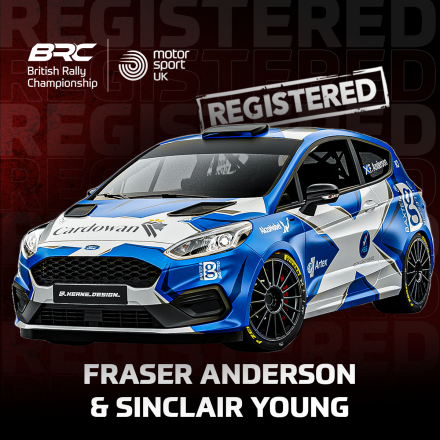