Anderson hoping for more on the Pirelli

Jamie Anderson has had mixed fortunes on the opening two rounds of the MSA British Rally Championship – with his results so far going against the traditional formbook – but he is relishing the return to gravel on the Pirelli Carlisle later this month.

On the opening round of the season in Mid Wales, the 2015 event winner suffered a puncture on the first stage, putting him out of contention before the event had got into full swing. Despite the early setback, the Leicester-based driver clawed his way back to 20th overall.

The gravel specialist then headed across the Irish Sea to tackle his first ever Tarmac rally on the classic Circuit of Ireland. Anderson and co-driver Ross Whittock started the event well, nestling themselves into the top 15 in the early stages. Staying out of trouble and building their confidence with every stage mile completed, the British duo ended the day in tenth at the overnight halt.

Going into the final day, the Michelin-supported driver leapt up the leaderboard as the Ford Fiesta R5 driver moved himself into the top five – a position he gained on stage 11 and held to the Ceremonial Finish outside Queen’s University in Belfast on Saturday evening.

We spoke to Jamie after the demanding Circuit of Ireland Rally.

‘The Circuit of Ireland was incredible, I can’t believe I have been missing out on so much,” enthused Anderson. “The roads are phenomenal, so fast, so tricky and so technical – it was a brilliant experience. Having never done a Tarmac rally before, Ross and I are delighted with where we finished and we can take a lot from this weekend for next year’s event.

“We are playing this season one event at a time. We have had a massive step-up from the BTRDA and competition in the BRC is so high – it’s great to compare yourself against the best around. Going into the Pirelli, I want to push on a bit more as we are more comfortable on gravel and we will see where we end up.” 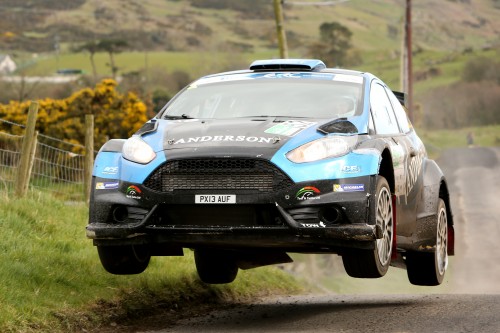