All roads lead to the Isle of Man for BRC showdown

The final round of the 2016 MSA British Rally Championship season is set to take place on the picturesque Isle of Man. A three-day showdown on 15-17 September will see the BRC crews tackle 167 competitive stage miles on the iconic Tarmac lanes. Elfyn Evans and Craig Parry wrapped up the BRC title on the Ulster Rally last time out and with the pressure off, the DMACK British Rally crew will be gunning for their fifth BRC win before the season is out.

The Welsh duo will be pushed all the way by Manx wildcards – Citroen factory driver Craig Breen, local-hero Mark Higgins – and a whole host of other BRC drivers who will all be fighting for the runner-up spot in Britain’s premier rallying series.

Heading to the popular island event in the pound seats are Welsh duo Tom Cave and co-driver James Morgan in the Spencer Sport-prepared Ford Fiesta R5. Cave has already been on the podium three times this year, with the top step the only position missing from the Michelin drivers impressive collection. Challenging Cave will be a host of other drivers, all-fighting for lucrative Rally Isle of Man points. Four others have a mathematical chance of taking the runners-up spot on the September spectacular.

Asphalt ace Jonathan Greer in his Pirelli-shod Citroen DS3 R5 already has two rostrums to his name on the sealed-surface in 2016. Greer timely played his ‘Joker’ to double his points on the Ulster Rally and vaulted up the pecking order heading to the season curtain call. Along with navigator Kirsty Riddick, the Ulsterman will be eager to return the French marque to the top of the BRC tree once again after a two-year absence.

Swedish superstar Fredrik Ahlin exploded onto the British Rally Championship scene on the Mid Wales Stages, challenging Evans on home soil on the opening round and at one point, showed the newly-crowned champion the way. The Welshman used his local knowledge to overturn his fellow Fiesta R5 driver eventually, but 25-year-old Ahlin was to have his own moment of glory two months later when he became the first Swede to win a round of the BRC since 1995 on the Pirelli Carlisle Rally. Three non-scoring rallies mid-season have seen him slowly slip down the order, but never write off the driver from Hammaro, as he will be more determined than ever to secure another win in the BRC before the year is out with Morten Erik Abrahamsen calling the notes.

Behind the wheel of his Skoda Fabia R5, Scotsman David Bogie’s results have not shown his true speed this season as the former BRC champion could have been in title contention had it not been for retirements on the Pirelli and Scottish rallies. Bogie has an outside, yet mathematical chance of taking the spot behind champion Evans if he wins on the Manx. Fellow Fabia R5 driver Desi Henry can also claim second, but would need to win the event – allied to the other drivers in front failing to finish – to climb towards the sharp end of the table. Henry already has two podiums this year and would love to make it three on the championship finale.

In the DMACK Junior BRC, Robert Duggan and Gerard Conway have already clinched the title in their Vauxhall ADAM R2. The Irish crew now have championship pressure off their shoulders, and Duggan will be putting his foot to the floor to add a Manx win to his impressive CV. Sindre Furuseth finished second behind Duggan on his first Tarmac rally. The Norwegian in his Renault Twingo R2 will be eager to emulate his Scottish success on the final event of the year while Duggan’s team-mate Mattias Adielsson will be gunning for his first Junior BRC win after chalking up several podiums earlier in the year. Look out, too, for Adam Bustard who will be keen to improve upon his career best third on the three-day event as he bids to move into the top three in the standings. Nabila Tejpar, Blair Brown and Nick Carr will all be jostling for a good result to springboard themselves up the championship order.

In the National Rally Cup, is all set to go down to the wire. Robert Blomberg in his Mitsubishi Mirage currently leads the way after a hat-trick of wins mid-season. The Swede has to finish inside the top four to take the title, but with the event being so long and the roads so challenging, nothing is guaranteed until the end of the final stage. Donnie Macdonald is the only man who can challenge Blomberg in the chase for the crown. The Scotsman has two victories to his name this season in his Mitsubishi Evo 9, and will be up for the fight from the word go.

Will Corry is the sole runner in BRC3 in the striking, sideways Toyota GT86 CS-R3, while Tony Simpson will be confirmed as the BRC4 champion in his Ford Fiesta ST. The Liverpudlian will go toe-to-toe with Peugeot 208 R2 driver Marty Gallagher for class honours on the event.

BRC Championship Manager Iain Campbell is eagerly anticipating the final round of the series on the Isle of Man:

“I cannot believe how quickly the 2016 season has gone as we prepare for the season finale,” enthused Campbell. “We may have titles confirmed, but its not over yet as the rest of the order has to be decided. There will be a real tussle as we have six drivers all in with a chance of taking second in the series, and what better place to host the curtain cull than on the legendary Isle of Man.

“Sindre Furuseth and Mattias Adielsson will also be going hammer and tong to beat each other in the championship standings and get one over Robert Duggan in the DMACK Junior series. Mattias will be desperate to record a win before the season comes to a close. There is one title yet to be decided, in the form of the National Rally Cup. Robert Blomberg has a healthy advantage, but as we have seen this year, anything can happen and Donnie Macdonald can swop in at the last gasp. It’s going to be a real spectacle. Stand back and watch the fireworks!”

All of the action from the Isle of Man will be broadcast on Channel 4, BT Sport and Motors TV shortly after the event. 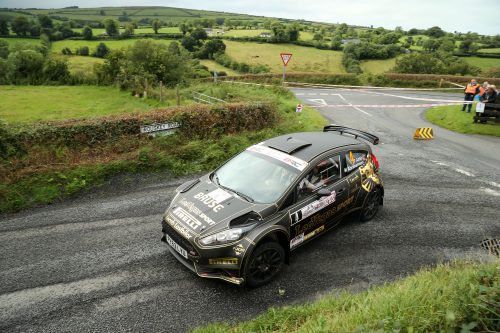