The Cadet Cup for BRC drivers aged 25 and under was to provide a new name in the winner’s circle on the Nicky Grist Stages.

Alex Waterman was reunited with his usual co-driver Harry Thomas for the fifth round of the series. Waterman has been building in confidence all season and with the familiar voice of Thomas in his ear, the pair punched in respectable times all event and took advantage of Tom Williams’ retirement to end the tough weekend in Wales top of the Cadet tree for the first time this season.

Williams and co-driver Bryan Hull have secured three consecutive second-place finishes this season, but the Cadet Cup top step continues to elude the young English driver. Setting the fastest time in class on stage one, Tom made his intentions clear from the off and never looked back until stage 16, when he and Hull had to prematurely curtail their excellent run after a clutch failure.

Nabila Tejpar enjoyed the mixed-surface challenge in her Fiesta R2 and with navigator Steve McPhee expertly guiding, the pair took their first Cadet podium of the season with a fine runner-up finish to strengthen their place in the top three in the title standings. Nabila has also secured the Ladies Trophy in the BRC this year and will go in search of further silverware on the remaining two events.

Championship leader Josh Cornwell arrived in Wales confident he could make it five wins from five events and with it be crowned the first BRC champion of 2017. On the opening loop of stages, however, Cornwell and co-driver Richard Bliss suffered gearbox gremlins, forcing them into early retirement. Restarting under SupeRally rules, Cornwell had the bit between his teeth as he went on a day-long charge, Josh rounded out a one-two-three for MH Motorsport but with Waterman winning in Wales Josh will have to wait until the Ulster to see if he will become champion.

The Haper Adams University team had a turbulent event in their Ford Fiesta National. James McDiarmid and Max Haines-Messenger lost a brake line on stage four resulting in the crew dropping time on the first loop of stages. Limping the Fiesta back to service the crew managed to get the car back out on time. On the afternoon of the opening day the team elected to stop after diagnosing an engine problem. The team will be back fighting stronger than ever on the Ulster as they go in search of another Cadet Cup top three. 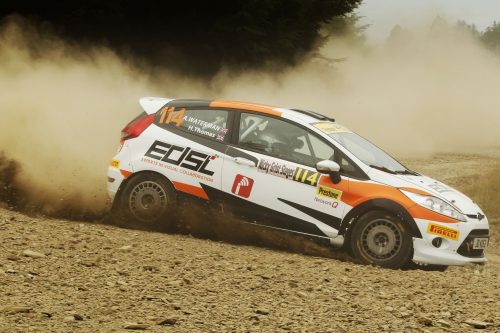