Fredrik Ahlin leads the Prestone MSA British Rally Championship standings, going into the famous Ypres Rally – the halfway point in Britain’s premier rallying series. The Swedish driver is four points clear over closest rival Osian Pryce and that includes a radiator-shattering retirement on the recent Scottish Rally. We caught up with the Swede after the first three gravel rounds.

Ahlin and Norwegian co-driver Torstein Eriksen have been the crew to beat this season with the Scandinavian pairing blazing a trail through the stages of England and Scotland. A dominant display on the Border Counties Rally was backed-up by a full house on the Pirelli International with the Skoda Fabia R5 driver claiming the win and cashed in his Joker Card for another five vital championship points. Come the Scottish Rally and Ahlin was locked into a battle with fellow CA1 Sport driver and homegrown hero David Bogie. Bogie wasn’t leaving the event without a home win and Fredrik was comfortable in his pace and was happy with second before a stone was flicked up into the front grill, bursting a hole in the radiator on the final stage of the rally.

Despite the retirement, everything has clicked and fallen into place for the Swedish sensation and has unquestionably been one of the forces on gravel so far this season.

“We have been comfortable and not risked anything,” explained Ahlin. “Our plan on the first few gravel events was to score good solid points and had it not been for the technical issues on the Scottish we would have had either three wins or at least a second place and two wins. As a driver it was hard to accept what happened in Scotland but these are things you can’t control and you have to just focus on the future and keep our pace and consistency going into the rest of the year.”

The 25-year-old feels at home in the CA1 Sport set-up under the experienced wing of team principal Martin Wilkinson, and comes across a different driver to the man in 2016 – a confident and more relaxed individual who has matured at the wheel of the LeoVegas-backed Skoda Fabia R5 this season.

“Last year we started quite relaxed but then things didn’t work inside or outside the car and in the end I was making stupid mistakes. The worst thing that could of happened was taking the Pirelli win and by leading the championship I thought I could beat Elfyn [Evans]. I put too much pressure on myself, where as this year I am keeping cool and calm and just focusing on my own job and nothing else. Torstein has been a really good influence in the car and he is doing a really good job which is helping me improve as well.”

A closed season switch from the Ford Fiesta R5 to the Skoda Fabia R5 was a canny move from the man from Hammarö and is gelling well with the Czech machine.

“There are many different aspects between the Skoda Fabia and Ford Fiesta. The real strange thing is that the Fiesta, if you drive it harder you will get some time back but the risks are higher. In the Fabia you can push hard but the risks are less as the car suits my style and I can make up time without pushing too hard.”

There is still one day of gravel left on the calendar but the rest of the season will consist of asphalt events – a surface which Ahlin admits to being weak on in the past.

“Ypres will be an important event for me as it will be all about getting as many kilometers as possible. I would like a top five finish and I am not worried about loosing points or the championship lead – I would rather get a strong finish and good points. I want to up the pace on the Nicky Grist Stages as I know that event well from last year. For the rest of the Tarmac events I have to be smart as it’s not my favourite surface and it will take some time to get used to the Skoda on the asphalt. I did Ypres in 2011 and have some experience of the roads but what will go in my favour is that I am used to competing overseas and doing international events – after all I come across to the UK for the BRC!”

With Ypres immediately on everyone’s mind, the longer-term end goal is simple for Fredrik.

“I want to be fighting for the title on the Isle of Man. We went really well last year and the most important thing over the next three events is to keep the championship alive. I would love to have a few points as a cushion going into the double header at the end of the year but first I am focusing event by event and take each stage at a time. There is still a long way to go.” 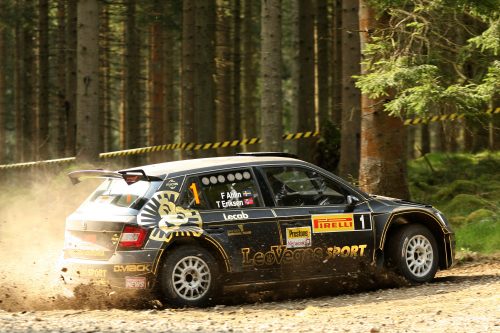