Swedish driver Fredrik Ahlin and his Norwegian co-driver Torstein Eriksen claimed victory on round five of the Prestone MSA British Rally Championship – the Nicky Grist Stages (8/9 July). Local crew Osian Pryce and Dale Furniss (Ford Fiesta R5) led for most of the event until a high-pressure fuel pump failure sidelined the Welsh pairing on Sunday afternoon – allowing the Scandinavian crew to inherit the lead in their DMACK Skoda Fabia R5. The Welsh event was their third victory this season – returning them to the top of the championship table.

The Nicky Grist Stages marked the start of the second half of the season and the two-day, two-surface event provided a demanding challenge for not only the crews in the cars but their service teams as well. The opening day would be played out over eight dusty, gravel stages used previously on Wales Rally GB, the British round of the FIA World Rally Championship. Teams then had two-and-a-half hours to change their state-of-the-art rally cars from gravel-flinging monsters to Tarmac-hugging race machines for the following day’s action over the famous Epynt Military Ranges. In all, 20 timed special stages and more than 115 competitive miles awaited the BRC’s best.

Leading the way on home soil were championship pace-setters Osian Pryce and Dale Furniss in their Ford Fiesta R5. The Welsh crew took advantage of running first on the road as they mastered the hot and dusty conditions in their Spencer Sport machine. An impressive five stage wins from eight meant Pryce went into the overnight halt with a healthy 19.3-second lead over closest rival Fredrik Ahlin. With no recent rainfall in mid Wales, the challenging stages were made even harder for the cars behind, with hanging dust causing a major headache. Ahlin and co-driver Torstein Eriksen battled through that dust to cut Pryce’s initial advantage of 22.5 seconds after the first loop, and the Scandinavian pairing looked primed and ready to battle the local heroes across the Epynt Ranges.

Ypres Rally winner Keith Cronin and runner-up Matt Edwards locked horns throughout the opening day, this time on Edwards’ home turf. The north Wales-based driver had the measure of Cronin to lead the Irishman by 9.3 seconds ahead of the Tarmac tests.

With cars changed into asphalt specification overnight, drivers similarly had to make a change as they left the sideways gravel approach behind and adopted a neat and tidy work ethic ahead of the daunting Epynt Ranges. This ribbon of Tarmac that floats across the land is one that favours the brave and is renowned for catching out the unwary.

Ahlin was fired-up to reel in Pryce, who was chasing a historical home win. Unfortunately, the battle royale showdown was to be denied as Pryce suffered a high-pressure fuel pump failure on stage 12, allowing Ahlin to run away to his third win of the season. The battle behind was an exciting affair. Edwards, fresh from his first podium in Ypres, was determined to keep Cronin behind him. The Irishman had no answer, and in trying too hard to keep up, he went off on stage 12 and visited a ditch, ending the M-Sport driver’s solid run. Edwards kept the pressure on Ahlin and bagged four fastest stage times on his way to equalling his best result of the season – elevating himself up the championship table.

The final step on the rostrum was up for grabs, and up stepped Rhys Yates/Alex Lee and Marty McCormack/David Moynihan. Yates and Lee put in a sterling performance all event and were determined to take their first podium this season. The Englishman resisted the pressure from an on-form McCormack in the closing stages, with the eventual margin between the two drivers just 3.7 seconds at the finish. Yates duly became the eighth different competitor to taste champagne in Britain’s premier rallying series this season.

Devine at the double in Prestone Motorsport News Junior BRC

It was a little bit of history repeating on the Nicky Grist Stages as the top three from Ypres recorded the same result in Wales, with Callum Devine and Keith Moriarty (Opel ADAM R2) claiming the Junior BRC win after two action-packed days.

The overall lead changed hands no fewer than six times throughout the event, with the front-wheel drive pocket-rockets entertaining the enthralled Welsh rally fans. Local star Meirion Evans and Jonathan Jackson stole the initial march in their Peugeot 208 R2, before a puncture on stage two saw them tumble down the order. Oscar Solberg/Patrik Barth (Ford Fiesta R2T) subsequently seized the advantage before they too came unstuck, this time with turbo woes. Marty Gallagher/Dean O’Sullivan and Cameron Davies/Michael Gilbey traded times and the lead at the front of the pack in their Peugeot 208s. Davies had almost called time on his rallying career after an accident in Ypres, but together with his team, he performed a herculean effort to get the car ready for his home event. The Welshman led at the overnight halt, just ahead of Gallagher.

Unfortunately, the fairytale would not be concluded on the Nicky Grist as the engine in Davies’ 208 let go at the start of the second day, forcing him out of contention. It was left to countrymen James Williams and Dai Roberts (Fiesta R2T) to uphold Welsh honours as they found themselves embroiled in a five-way scrap for supremacy.

During the fast and furious lead changes at the front, Irishmen Devine and Moriarty bided their time as they got used to the nimble Opel ADAM R2 on gravel. Once onto his preferred surface, Devine pushed on and after snatching the lead on stage 11, he never looked back en route to consecutive wins in the Junior BRC. William Creighton and Liam Regan (Peugeot 208 R2) had a quiet event by their usual high standards and similarly increased their pace on the Tarmac to slip into second, in so doing taking their fourth podium of the year to share the championship lead with the on-form Devine/Moriarty.

James Williams and Dai Roberts took a popular podium as the cars returned to the centre of Builth Wells, keeping the hungry Gallagher/O’Sullivan and Evans/Jackson behind on the overall leaderboard.

The Cadet Cup for BRC drivers aged 25 and under was to provide a new name in the winner’s circle on the Nicky Grist Stages.

Alex Waterman was reunited with his usual co-driver Harry Thomas for the fifth round of the series. Waterman has been building in confidence all season and with the familiar voice of Thomas in his ear, the pair punched in respectable times all event and took advantage of Tom Williams’ retirement to end the tough weekend in Wales top of the Cadet tree for the first time this season.

Williams and co-driver Bryan Hull have secured three consecutive second-place finishes this season, but the Cadet Cup top step continues to elude the young English driver. Setting the fastest time in class on stage one, Tom made his intentions clear from the off and never looked back until stage 16, when he and Hull had to prematurely curtail their excellent run after a mechanical failure.

Nabila Tejpar enjoyed the mixed-surface challenge in her Fiesta R2 and with navigator Steve McPhee expertly guiding, the pair took their first Cadet podium of the season with a fine runner-up finish to strengthen their place in the top three in the title standings.

Championship leader Josh Cornwell arrived in Wales confident he could make it five wins from five events and with it be crowned the first BRC champion of 2017. On the opening loop of stages, however, Cornwell and co-driver Richard Bliss suffered gearbox gremlins, forcing them into early retirement. Restarting under SupeRally rules, Cornwell had the bit between his teeth as he went on a day-long charge. With Williams – his only mathematical challenger in the series – now absent, Josh sealed the deal on the Tarmac of Epynt to secure an unassailable points lead in the Cadet Cup – rounding out a one-two-three for MH Motorsport.

David White and son Matthew were the sole runners in BRC4, but that didn’t stop them enjoying themselves across the legendary Welsh stages. On their less preferred surface, the Ford Fiesta R2 duo set some respectable times on the opening day before kicking it up a gear on the Tarmac to take the BRC4 spoils in Builth Wells. In the National Rally Cup, William Hill was making his debut in the BRC and was brilliant over the two surfaces to put more experienced crews behind him on the overall leaderboard. Alongside co-driver Richard Crozier, Hill clinched the National Rally Cup victory, making it three different winners so far this season.

Nicky Grist Stages – Fredrik Ahlin – first overall Prestone MSA British Rally Championship – Skoda Fabia R5
“It’s been a rough patch since the Pirelli, so it’s nice to get back to winning ways. It looks like we have a strong lead in the championship over Osian now. It was a shame to see him retire, but unfortunately that is part of the game. We have really worked hard on our Tarmac performance and I am very confident for the rest for the championship as I now know I can fight for wins on all surfaces.”

“This is certainly a nice habit to have. Competing on two events in as many weeks has really helped me as it’s a lot of time in the car – and you forget how good these cars are when you get back to normality in your road car. It’s been a strong weekend for us with no major moments. We are really building confidence with every event and looking forward to the rest of the season.”

“It’s brilliant. For it to come down to four seconds or so on the last stage was good fun. I’m really happy to get third. It was good to have such a close battle as it put the pressure on and really focused everything for the final few stages. It’s a tough event and I am so happy for everyone that has supported me as it’s like a win for us.” 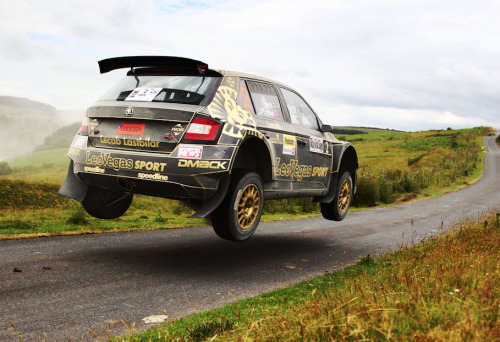