The ADAM Cup is to launch in the UK this season. The one-make series for controlled specification Vauxhall ADAMS will follow the first five rounds of the Prestone MSA British Rally Championship, with younger competitors eligible to enter the increasingly popular BRC Cadet Class.

Cars will be based on those competing in the highly competitive and successful Opel ADAM Cup in Germany with the addition of a UK-developed ‘gravel’ kit for use on forest rallies. New and used examples are currently available for purchase or hire from the Vauxhall Motorsport Junior Rally Team – 2016 British R2 and Junior Champions.

A valuable prize fund is now in place for ADAM Cup competitors. This includes vouchers redeemable for parts, products and services worth over £1000 awarded on each round, with a further haul of prizes presented at the end of the season. The overall winner will receive a supported drive on the 2018 Wales Rally GB – or alternativly the first three rounds of the 2019 British Rally Championship – should they wish to continue in their own car for the final two rounds of the British Rally Championship that are hosted by the Wales Rally GB.

“We are delighted to have finally brought everything together so that we can announce the running of the ADAM Cup this season”, said Series Manager Simon Mauger. “Of course, we would have liked to confirm things earlier, but with the prize fund in place, cars readily available – plus a valuable association with various suppliers and sponsors – we finally have a fantastic package on offer. And, with competitors able to drop two rounds and count their best three scores, even if they can’t make the first round it means they’re still in with a chance of winning.”

Series coordinator Simon Slade, who has previously ran a number of successful manufacturer-backed one make series, added: “Most of us involved with the sport in the UK agree there is a real need for a high-profile, aspirational, reasonably priced and professionally run one-make series. The ADAM Cup ticks all these boxes!”

Organisers extend an invitation to all competitors who are thinking about entering the ADAM Cup to come and test drive a car to find out just how good they are to drive and to appreciate their impressive build quality.

Supporting the series are some of the best-known and well-respected brands that are synonymous with motorsport: Vauxhall, Pirelli, Speedline Corse, Ravenol, Goodridge, PIAA, AP, Mintex, Motamec Tools and SuperPro. 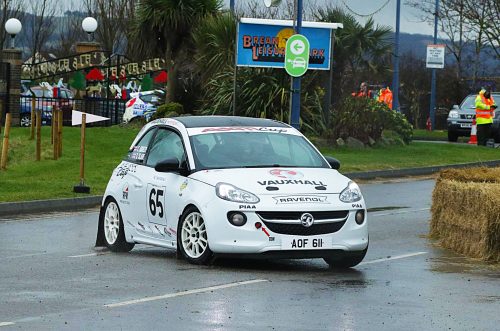