Reigning Academy Trophy Champion Johnnie Mulholland will step up to the Junior British Rally Championship in 2022, driving an ex-William Creighton Ford Fiesta Rally4 – the very car that won the 2021 title.

Mulholland enjoyed a stellar season in the Academy in 2021, winning the category with two rounds to spare after a faultless performance at the Beaton’s Building Supplies Mull Rally last October.

The 24-year-old from Co. Antrim secures free entry to each round of the 2022 Junior BRC as his prize for winning the title and upgrades from a Fiesta R2T to the latest machinery from the M-Sport Poland stable.

“After our 2021 success, the Junior BRC is the next obvious step” says Mulholland.

“Even if I didn’t win last year, the Junior BRC is where I would be moving up to. I’m really looking forward to the first round, I have a new car, it’s a new rally and its relatively new competition. All I can hope for is that this season goes as well for us as last year did.”

Mulholland is no stranger to the British Rally Championship, having taken the runner-up spot in the Academy pre-cursor, the Cadet Cup back in 2018. The Academy was designed as a steppingstone into the hotly contested Junior BRC fight which will see progressive youngsters go head-to-head for the chance to secure a drive in a Hyundai Motorsport Customer Racing built Hyundai i20 N Rally2 on a round of the FIA World Rally Championship in 2023.

Having won four rounds of the Academy in 2021, Mulholland is no stranger to the top step of the podium, but the prize drive incentive has attracted the attentions of several young aces and Mulholland understands he faces a big challenge in the driver’s seat this season.

“As I said, I hope this season goes as well as last year did, but I’m also realistic. The Junior section of the BRC is always known for its stiff competition, I often looked at some of their times last year and thought how are they doing that? I think we’ll have to up our pace, of course, the newer, faster car will help but even that will take a bit of getting used to. I found it quite different to last year’s machine when I drove it. I’ll obviously try my hardest and give it my all but there is no doubt that the competition is going to be tough, a challenge I am happy to try and conquer however.”

The opening round of the 2022 British Rally Championship takes place on the closed public roads of Essex, at the Corbeau Seats Rally Tendring & Clacton at the end of April. 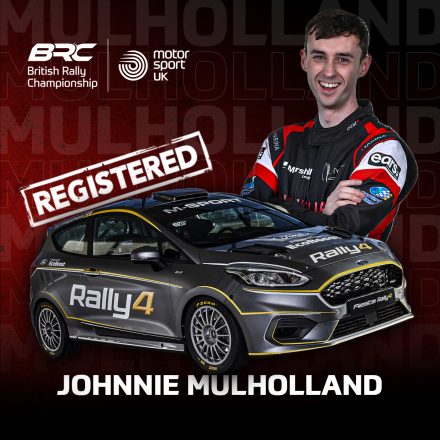