Sliding in the rain on the Nicky Grist Stages

Heavy early morning rain descended on the opening day of the Nicky Grist Stages – round five of the MSA British Rally Championship. The two-day, mixed-surface event saw the BRC crews tackle eight demanding stages through the gravel forests of mid Wales. The near biblical weather made the stages incredibly slippery for the crews as they snaked their way through the 45 competitive miles.

DMACK British Rally Team driver Elfyn Evans picked up where he left off from his Scottish success as he leads into the overnight halt. The Ford Fiesta R5 driver was not to have it his own way however, as the Welshman spun on the opening stage and suffered pop off value problems on the second. The two stages before the lunchtime service saw Evans get into his dominating stride, a feat he would continue until the close of play – stretching out a healthy 48.1-second margin.

Tom Cave in his Michelin-shod Ford Fiesta R5 set fastest time on the last stage of the Scottish Rally and carried the form into his home event by drawing first blood on the opening stage, Crychan 1. Cave would lead the event until an inspired Evans snatched the advantage on the third stage, the famous Route 60 test. One of the main movers on the first day was Irishman Desi Henry in his Skoda Fabia R5 – climbing into podium contention, heading to his preferred sealed-surface tomorrow. David Bogie in his Pirelli-backed Skoda Fabia R5 picked himself up after a disappointing home event retirement last time out on the Scottish to hold fifth with an ever-improving Jamie Anderson just ahead in fourth.

Fredrik Ahlin would have been in the top three fight, but a costly error on stage two saw the Swedish driver get stuck in a ditch, retiring for the third time this season. The CA1 Sport team who run Ahlin will be preparing the car for Fredrik to gain further Tarmac mileage tomorrow ahead of the final two rounds.

Tarmac specialists, Alex Laffey (Ford Fiesta R5) and Damian Cole (Ford Fiesta S2000) have hung onto the coat tails of their more experienced gravel competitors on day one. The pair are poised to climb the leaderboard on day two, bringing their Epynt experience to the fore.

In BRC2 Matt Edwards continues to impress in his Mitsubishi Evo 9. The Welshman is delivering his traditional giant killing performance and the Nicky Grist could be the event where Edwards wraps-up the first title of 2016, providing he finishes the stages tomorrow.

In BRC3 Chris Wheeler is the sole runner in the class and holds a respectable 30th overall. In BRC4 Marty Gallagher brings the Peugeot 208 R2 to the BRC and is reveling in the conditions taking a stranglehold of the class on his first event outside of Ireland.

In the National Rally Cup, Robert Blomberg leads the way in his Mitsubishi Mirage ahead of John Morrison and Donnie Macdonald, both in Mitsubishi Evo 9’s respectively.

“It was a tough day for us today, it was like Wales Rally GB conditions. We had a spin and issues with the car, making it a tricky morning but the afternoon loop was pretty smooth and we drove clean for a good end to the day.

“I held back for a stage or two as it is easy to make a mistake as Fredrik [Ahlin] showed. The weather looks to be the same tomorrow. I now have to get my head into Tarmac mode. All we can do is be on it from the word go. You can’t be too cautious as it will be easy for someone to take 15-20 seconds out of you.”

“It was a positive day and we had a good clean run this afternoon despite the stages being very tricky. The balance of the car wasn’t great and it made it difficult to set the car up with the changing conditions.

“The surface became polished, making braking points difficult to judge in places. We are in second behind Elfyn [Evans]. I can’t complain at that.

“I am going to keep pushing and see where it takes us tomorrow. Epynt is an unforgiving place, especially in the wet. We just have to keep the head tomorrow.”

“Nobody anticipated the amount of rain that we had this morning. We had a steady rally today – it was very slippery and very tricky and we are happy to be third overnight. We had a few moments. This rally is known for a lot of cuts and one of the cuts we took too much and nearly ended up on our roof. We were lucky to get away with it!

“We have never been over Epynt before but Tarmac is Tarmac and it is what we are used to, so tomorrow we are going for a big push. It’s all to play for.”

The BRC teams will be working into the night as they have just two and a half hours to turn the cars from mud-slinging monsters into Tarmac-hugging weapons as the action continues tomorrow with ten stages on the famous Epynt Military Ranges. 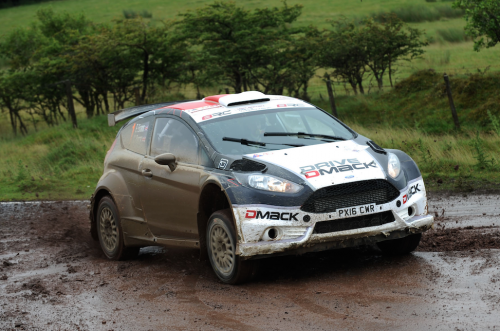