Anything the BRC top-flight can do, the Junior contenders usually do too.

Like its older cousin, the Junior British Rally Championship title fight would go down to the wire in a thrilling final-round blast across some of the finest lanes in Northern Ireland in November. At stake, was not only the coveted Junior BRC title, but also a chance to drive a Hyundai Motorsport Customer Racing i20 N Rally2 on a World Rally Championship round in 2022.

No wonder then that the battle for the title in 2021 was as intense as it’s ever been.

At the forefront of that fight for the crown was two-time JBRC runner up William Creighton and rookie Eamonn Kelly. Just nine stages and over 93 miles of closed road action stood in the protagonists way, as well of course as each other, and both Fiesta Rally4 pilots would be doing their level best to clinch one the biggest prize in British rallying.

However, step back a few months and it was far from a two horse race.

After three rounds, the Junior BRC had three different winners (as did the BRC) and there was a healthy list of young chargers all eager to make an impression on the leader board as the season progressed.

Taking first blood at Oulton Park in May was Creighton.

Being twice the Junior BRC bridesmaid was enough to lure the Moira driver back to the series in 2021 but with a Junior World Rally Championship programme on the cards as well, it could be a tall order to even contest enough rounds to win, let alone score. So starting the year off with victory was a welcome bonus for Creighton and co-driver Liam Regan, as the Neil Howard Stages kicked off the BRC at a race circuit for the first time in its 63 year history.

After a dismal opening round, Ruari Bell entered the fray with a blistering win at the second encounter and the season’s first gravel round, the Nicky Grist Stages.  The 2019 Fiesta Trophy victor was another to return to the hotly contested Junior BRC and the London ace forced Creighton into a corner with a blistering pace.

Creighton would subsequently end his rally off the road and a zero score would create a headache for Creighton’s aspirations. Taking nothing away from Bell and Gareth Parry’s victory though, as the pairing were a tour-de-force on the Welsh gravel and threw their hat into the ring for the title as a result.

Staying on gravel for the third encounter saw Creighton skip the Grampian Forest Rally due to JWRC commitments and others in the series to capitalise on his absence. Irishman Eamonn Kelly did just that. Despite his lack of gravel experience, Kelly and co-driver Conor Mohan returned a mature drive, way beyond their years to scoop a maiden BRC win.

Bell had enjoyed a convincing lead during the day however, but technical issues on the Fiesta Rally4 forced him out ahead of the final loop, leaving Kelly to pick up the all-important 25 points and with it – the lead of the championship.

Creighton would need to make the rest of the season count and he did just that, taking the Trackrod Rally Yorkshire victory in September and as the series made its debut on the legendary Mull Rally, Creighton produced yet another masterclass, taking his 1-litre Fiesta to a sensational top ten result and Junior win in the process.

Kelly was on the podium once again with second in Yorkshire and third in Mull, keeping his title hopes firmly alive but would suffer his first retirement of the season at the Cambrian Rally in October as driveshaft failure handed him a zero score. With two dropped scores enabling wiggle room, it was nevertheless a disappointment for the impressive ace.

Creighton by contrast was in firm control in the North Wales forests, bagging another top score to draw up a final round grand slam in Ulster.

However, all Creighton needed to do is finish eighth or higher and although on paper it sounded easy; Ulster lanes in November had all the potential to throw up some surprises.

But Creighton and Regan had been a master of these situations and used all their experience to get the job done, taking the title after Creighton’s two runner-up spots.  Coupled with a buoyant debut season in the Junior WRC, he finally bagged the crown he had been longing for.

The Northern Irishman will now be in action in a Rally2 in the WRC in 2022 – watch out for that one.

Finishing third in the title race was Scotsman Finlay Retson. The Fiesta Rally4 pilot, joined by Rhys Stoneman on the notes showed flashes of brilliance throughout the season with at least six fastest stage times, but couldn’t quite get all their ducks lined up to challenge the leaders.

Fourth on the season opener was followed by an equal career-best second place at the Nicky Grist. His Grampian Rally was hampered by technical issues and a broken ankle, suffered at a stage start, but he soldiered on to take valuable points. Another fourth in Yorkshire made way for a confidence boosting runner-up spot on Mull, before Cambrian retirement sealed their championship fate in third.

Johnnie Mulholland and Calum Maguire have been arguably the most consistent points scorers in 2022 and that strength handed them the Academy Trophy honours and free entries to the 2023 Junior BRC. In an older specification R2T Fiesta, Mulholland made his return to the Junior feeder series worthwhile, fending off Fraser Anderson to scoop the honours and in the process, take fourth in the standings; impressive stuff.

Kyle White and Sean Topping brought the noise with their Peugeot 208 R2 and entertained the crowds with the “door handles” approach. Down on power compared to his Rally4 rivals, White manhandled the 208 to an opening round second place, followed by another podium on the Nicky Grist gravel.

White even led the Junior BRC charge before a sad sequence of retirements jostled him down the order. A fourth on the brutal Mull Rally was his swansong for 2022.

Irishman Brian Brady was another returnee to the Junior BRC and enjoyed a solid start to the season with Eamonn Creedon on the notes. Third on the Grampian was an formidable sign of their increase in pace in the Fiesta Rally4, but an early Trackrod retirement saw them bow out of the challenge.

There were impressive performances across the season from the likes of David Kelly, Jason Dickson, Eddie Lewis, James Boland, Rupert Flynn , Casey Jay Coleman and Joseph Kelly although many elected to contest a part-programme which ultimately saw them finish down the leaderboard.

Aoife Raftery was a breath of fresh air in the junior BRC as the sister of former Billy Coleman Award winner and Junior BRC contender Dean, contested the Academy. Despite her maiden rally season, Raftery enjoyed a consistent improvement in pace throughout the year to take second place in the category driving a Fiesta R2, offering a great grounding for the future.

The Junior BRC and Academy Trophy returns once again in 2022, with the Hyundai Motorsport Customer Racing i20 N Rally2 WRC prize drive up for grabs. Something tells us the battle for that will be red hot. 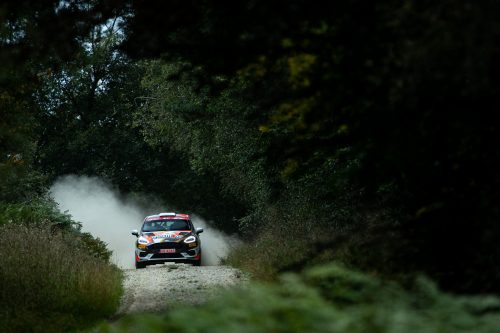