The Motorsport UK British Rally Championship made a sensational return to the stages in 2021 as a bumper list of contenders, awash with champions from the past and present, were all eager to do battle for the prestigious title.

After a year’s hiatus thanks to the pandemic, a shuffled season saw an action-packed seven round calendar announced offering a dynamic mix of events on both gravel and asphalt, visiting each one of the UK’s four home nations.

Round 1. Neil Howard Stages in assoc. with Graham Coffey Solicitors

In a first for the BRC in its 63-year history, the BRC would contest an event held entirely at a race circuit as the Neil Howard Stages at Oulton Park opened proceedings in May.

In a star-studded entry list, it would be Irishman Sam Moffett who took first blood, taking victory by a slender but all-important one-second margin over the chasing M-Sport pilot Rhys Yates.

Moffett and co-driver Keith Moriarty hustled their Pirelli-shod Ford Fiesta Rally2 to a maiden BRC win as Yates and co-driver James Morgan equalled their best BRC result. However, on paper, it was Frank Bird and Jack Morton who topped the leader board after a blistering day of action on the Oulton stages, only to fall foul of a technical regulation that handed them exclusion.

Osian Pryce and Noel O’Sullivan would keep the pressure on the front-runners to take their Volkswagen Polo GTi R5 to the final podium spot.

July heralded a more traditional BRC encounter as the legendary forests of mid-Wales offered up another scintillating prospect of Britain’s elite crews battling it out for honours in the world-class gravel stages of Halfway and Crychan on the Nicky Grist Stages.

Bouncing back from a “trying” opening round, it would be two-time BRC champion Matt Edwards and co-driver Darren Garrod who took his Melvyn Evans Motorsport Polo GTi to a five-second victory over fellow Welshman and BRC returnee Tom Cave after a thrilling battle in the classic Welsh forests.

Edwards, bidding to be the first driver in history to take three BRC titles in a row, secured the first victory for the Volkswagen Polo GTi in the British Rally Championship – ending a 21-year drought for the German marque, with team mate Pryce yet again rounding out the podium in his Michelin backed machine.

There would be drama further down the field as the Proton Iriz R5 of Ollie Mellors and Max Freeman headed for the sun in a dramatic accident just a few hundred yards into the opening test of the rally. The crash would end their BRC title bid for the season whilst Freeman recovered from a subsequent leg injury.

Yates missed out on a podium in fourth whilst a familiar name made a sensational BRC comeback; Matthew Wilson. The 2005 champion would be tasked by M-Sport to make in-roads into the Melvyn Evans Motorsport lead in the team charge and his appearance would be one of many throughout the season alongside team mates Yates and Seb Perez.

The third round saw the BRC head for the northeast Scottish forests of the Grampian Stages for the first time in well over 20 years and the super-fast tests of Drumtochty and Fetteresso would provide yet another unpredictable encounter.

It would be M-Sport Director Matthew Wilson who stormed to his first victory in the BRC since 2005 as he took an inspiring win in the Ford Fiesta Rally2. After opening up an early advantage on the first stage of the day, he would never relinquish the lead to win by a comfortable 20 seconds from Pryce, as Yates wrestled with pop-off valve issues to finish 18 seconds shy.

Four-time BRC champion Keith Cronin made a shock comeback to the series in Wales. Driving a Hankook Ford Fiesta Rally2, he and co-driver Mickie Galvin built their pace gradually throughout the season to take fourth on only Cronin’s second event behind the wheel since 2018.

A name missing from the list of finishers would be Edwards. Wilson’s nearest challenger at the mid-point of the event, Edwards suffered from a chronic misfire in his Polo and despite the team affecting repairs in service, he was forced to park up on the final loop throwing his third title challenge into disarray.

With three rounds completed, the BRC had seen three different winners and that scenario had the potential to continue in the Yorkshire forests at the end of September as the championship made a return to the Trackrod Rally.

Yates impressively led the standings after a consistent season but with just 14 points separating the top five and the prospect of the bonus point Joker cards being brought into play over the closing rounds, choosing a champion at this stage of the season would have been a risky affair.

Yet there was a strange familiarity with the Trackrod and the rally was arguably decided on the Friday night. Just one stage was on offer, but the dry, dusty and unforgiving Dalby forest under the cover of darkness proved pivotal.

Edwards opened up a whopping 17-second lead through the 12-mile test as others battled with visibility in the still September night. Pryce was his closest challenger although he would be forgiven for not feeling very close to the front at all, with five more stages in store the next day.

But Edwards’ form continued all rally long, winning all but one of the events super-fast tests to go some way to reconcile his Grampian retirement.

Title charge firmly back on for Edwards then?

Well, he wasn’t out the woods yet – well, actually for one round he was, as the BRC made its maiden voyage to the iconic island of Mull for the Beatson’s Building Supplies Mull Rally. The toughest and most demanding event on the calendar, with most of the event’s closed public road mileage taking place overnight, the Mull Rally would test even the most experienced of BRC crews.

Its status on the British rallying calendar is legendary; its stages favour the brave, those that can see in the dark – and the locals. But the British Rally Championship contenders had been eyeing up the challenge all season

Sadly, just a handful of protagonists made the journey and it was a two-horse race between Edwards and Pryce as they sat on the start line of the opening test. But by the time Pryce was shown the 10-second countdown, Edwards was already off the road.

An uncharacteristic error by the Conwy man saw him damage the rear of the Polo after cutting a left hander and pivoting into the scenery. He limped through and with roadside repairs, Edwards could make it back to service, albeit almost 7 minutes lost.

What followed was an Edwards masterclass. Seven stage wins and numerous stage records were broken over the next two days with Edwards throwing everything he had at catching Pryce. Overhauling him would be a tough ask and Pryce enjoyed a mature drive to keep Edwards at arm’s length, taking his first BRC win since the two-wheel drive era in 2012.

Junior BRC contenders William Creighton and Liam Regan were another crew to shine on the tricky island event, taking a sensational third in their Ford Fiesta Rally4 – no mean feat from the progressive young driver.

After a searing season of action on the stages, the fight for the three BRC categories was set to reach an important phase as dropped scores begin to take effect on the title race, and the Cambrian Rally marked the penultimate round of the season.

The popular North Wales forests have often witnessed World Championship battles, and the fight for top honours on the slippery gravel stages could well shape the 2021 BRC outcome. Four drivers headed into the event with a chance of the championship; Edwards, Pryce, Yates and Wilson. But by the time they emerged from the seventh stage – that was down to two.

Pryce was on form. Ten seconds faster than anyone else on the opener saw Edwards have his work cut out, despite being on home soil. Retaliating on the third test enabled him to claw back four seconds but a second, fairly major error in 2021 followed in the next, damaging his Polo’s suspension and dropping 1m 47seconds to Pryce.

That allowed Pryce to cruise to his second BRC win of the season and ensure the title fight would go down to the wire in Ulster. Seb Perez was an impressive second place for M-Sport after a clean run saw him get to grips with the Fiesta in fine style.

What of Edwards? Well – read this to see how he managed to recover to third place – and keeping his title hopes firmly alive into the final round of the season.

It all came down to this.

With dropped scores and Joker scenario’s taken into account, Edwards HAD to win to take the title. If he didn’t anything less than score maximum points, it would be Pryce who would take the trophy back to Wales.

Ahead of them, the tricky, bumpy and hugely unforgiving Ulster lanes around Antrim and with an almost `winner takes all` approach – the fight for the title in the lanes would undoubtedly be blistering.

Joined by some of Ireland’s best drivers, the BRC contenders would enter a battle royale – and it would be first blood to Pryce. But by the second stage Edwards took control and as he settled into the Northern Ireland roads, Pryce was feeling less than comfortable.

Despite briefly taking back the lead on the fifth test, Edwards once again regained control to head into the final loop of three stages with an eight second lead. At this point, it is worth pointing out that Pryce and Edwards were about 1m 30secs ahead of ANYONE else, such was the intense battle for the title.

But on the penultimate stage of the final round; the title race was decided.

Losing grip under braking to a square right, Pryce put his Polo into a field and on its roof  and out of the rally, out of the fight.

A third championship victory in a row – a feat never accomplished in its 63-year history went to Edwards after a nail-biting final encounter of the season. He and co-driver Darren Garrod could spray the champagne that night with Edwards a record breaker, firmly planting his marker as the best in the business.

Josh Moffett and Andy Hayes took third, giving Hyundai their first podium of the season in their i20 R5 whilst Cronin bagged his maiden rostrum spot of 2021 in third. 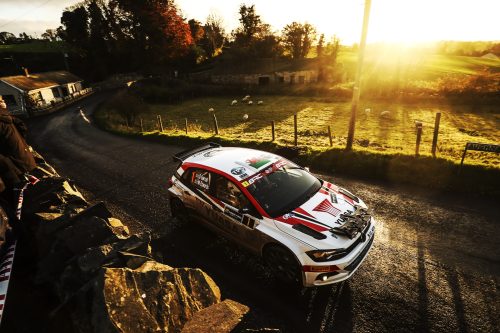