Welcome to the age of the younger British drivers!  30 year old Toyota driver David Llewellin scored his second title in the BRC in 1990 after a second place in the opening round of the series followed by four straight wins, becoming champion even before the end of July!  The message however was clear from the start of the season.  The winner of the opening round was Colin McRae, son of the man who already still holds a record of five titles.  At the age of 21, Colin’s victory on the gravel Cartel Rally in Yorkshire was his first international win, gained at the wheel of a rear-drive Ford Sierra Cosworth, taking advantage of a turocharger failure on the final stage for Llewellin.  Colin became quite the closest challenger to Llewellin through the year.  It was not straightforward for Colin as he had to fund his programme privately, but that problem was to end the following year with the arrival in the BRC of Subaru.  The Legacy 4WD Turbo had been introduced into world championship rallying in 1990 and for 1991 Rothmans supported an entry in the BRC for the Prodrive team with Colin as the driver.  Colin’s closet rival was Russell Brookes, now a veteran of 46 years of age, for who, this his final full season, at the wheel of Ford’s new Sierra Cosworth 4×4.  By the end of 1991 there was another new car coming. David Llewellin was entered in a Nissan Pulsar/Sunny GTI-R and led the Audi Sport Rally (!) from start to finish only to be dropped from the team immediately afterwards!  By 1991 there was a growing interest elsewhere in the BRC when Ford offered up to ten Group N Sierra Cosworth 4×4 cars to selected young drivers a theme which was continued in 1992 with help from Shell which led to Colin’s younger brother Alister winning the championship’s Group N title.  Already the message of the McRae clan was becoming clear.  Three members of the family finished in the top ten on the Scottish Rally in 1991!   Another important driver entered the BRC scene in 1991, Richard Burns won his class on the Scottish and ended the season winning the one-make Peugeot GTI rally challenge.

For 1993 the BRC was restyled into a five round series, one round in each nation and the second, end-of-season round in Wales being dropped.  The two all-asphalt events awarded extra points.  Colin McRae was promoted into the WRC with a selected programme of events in the Legacy, waiting for the moment the new Impreza model became available.  For the BRC Prodrive ran a two-car Subaru team with Burns and Alister McRae, Alister having a frustrating season but Burns had his first major success when he won the opening BRC round, the Vauxhall Rally of Wales.  He then had three more wins, including the final round in the Isle of Man, ending the season, at the age of 22, the youngest ever BRC champion.  This came one month after Colin had scored his first world championship rally win, in New Zealand, the first WRC win also for Subaru.

1994 was to be a memorable season, the final time that the BRC was open to full Group A cars, a season with excellent free-to view television coverage and also the first real success for Malcolm Wilson’s Michein sponsored team of Ford Escort RS Cosworths.  Wilson’s season started with a fuel pump failure on the opening round followed by victory on four following events, victory on the opening round going to Wilson’s teammate Stephen Finlay.  Hot in the footsteps of the recent McRae family dominations came another family.  The 1994 Junior champion was Mark Higgins in a Honda Civic Vti while his brother David drove a Peugeot importers 106XSi.  From now on the BRC was going to cater for what was commonly called “Formula 2” cars and the champion in this category in 1994 was David Llewellin, now driving a Vauxhall Astra Gsi for their importers team.

A new twenty year era for the BRC started in 1995 with the Vauxhall Rally of Wales.  Although four-wheel-drive, turbocharged cars were allowed to compete on the events, albeit without scoring points, the championship was now for the F2 cars and overall winner of the opening round was the Nissan of Alister McRae.  Significantly however the remaining four events were won by bigger cars including, making a guest appearance, Ari Vatanen on the Pirelli Rally in an Escort RS Cosworth.  Alister went on to become the inaugural title holder under the new rules, but despite the way that the championship cars were secondary competitors on events, the new formula attracted importer interest from seven manufacturers, more than the world championship and continental drivers active again.  Belgian driver Gregoire de Mevius had moved from Mazda to drive as teammate for Alister McRae, Alain Oreille for Renault, both former FIA champions, finishing the series third and fourth respectively.  Ford meanwhile, had been developing their Mark V Escort RS2000 car particularly for Gwyndaf Evans who won the title, Volkswagen’s latest Golf arrived and Skoda came to the championship as well with their Felicia for 1996. The BRC further encouraged the participation of one make championships within their championship, for Peugeot and Subaru cars.  The BRC these days was undoubtedly the premier national series in the world but still British drivers were supreme in 1997 for the Isle of Man born driver Mark Higgins.  In 1998 the championship was divided in the calendar between drivers and manufacturers and by now none of the events counted for a FIA championship, which opened up better chance of television coverage which otherwise would have been effectively forbidden.  This was a special reason why foreign teams were attracted.

By the late ‘nineties the two-litre “Formula 2” scene was becoming the most interesting area in the sport, with cars offering power outputs in the high 200bhp mark and engine maximum revs towards the five figure mark.  These cars were becoming so special that “F2” cars won two world championship rallies outright.  In Britain there was now a second-level “F2” movement, for cars with engines up to 1.6 litres producing 200bhp.  As the decade came to a close it was Renault’s Megane Maxi cars which were unbeatable in the hands first of Martin Rowe and then the Finnish driver Tapio Laukkanen.  Still the series kept attracting new manufacturers.  SEAT came into the series with Ibiza cars and sponsored the Jim Clark Rally.  It was a most exciting time! 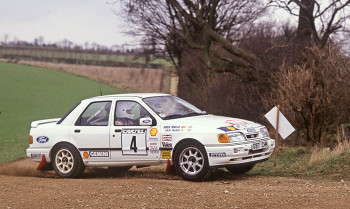 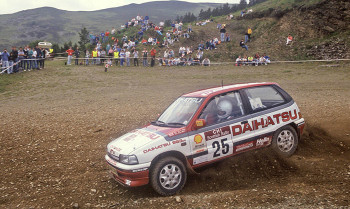 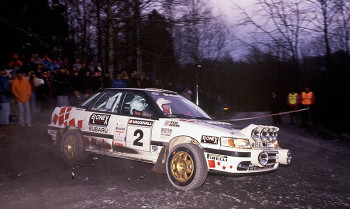 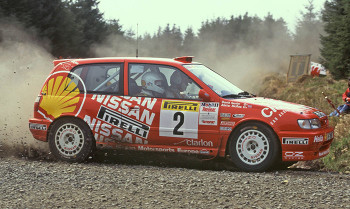 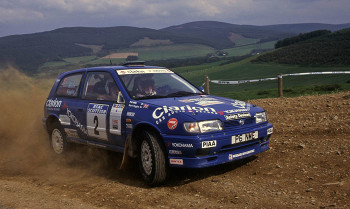