The international interest in the British Rally Championship at this time was evidenced by the first three seasons of the decade seeing Finnish drivers as champion, Hannu Mikkola, Pentti Airikkala and Ari Vatanen in succession.  Already in 1978 the title of the series had been changed from British Rally Championship to British Open Rally Championship.  The early ‘eighties was the period when the sport was changing radically.  1981 was the first year that the country’s world championship rally (until 1992 it was called the Lombard RAC Rally) was won by a turbocharged four-wheel-drive car.  This in turn led to the influence in Britain of the Group B cars, leading to the sudden rule change for 1987 which no longer permitted these cars (as happened in the WRC) to run in the British series.  Two other major factors of the BRC in the eighties was first the emergence of the McRae name, with father Jimmy McRae winning the British title no fewer than five times in the decade.  Then the rumbling pressure to re-invent the traditional British sport of secret rallying by allowing pre-event reconnaissance and the use of pacenotes.

It wasn’t just the personal movement of the competitors which recognised the international interest, it was the governing authorities of the sport as well.  Of the five rounds in the 1980 British series, only two (the Mintex in Yorkshire and the Welsh Rally) did not count for the European Rally Championship – and the Welsh had only dropped out of the ERC that year.  1980 saw a new style Vatanen gain his second BRC title, the series sponsored by Sedan Products, this time by finishing every event and finishing second four times but only winning once, on the Welsh.  Ford meanwhile decided that this would be the last time they would rundevelop and officially run the Escort but the Escort continued in competition through 1981 sponsored by Rothmans when Vatanen won the Welsh again sponsored by Rothmans who also sponsored the championship.  1981 was the first year that the McRae clan imposed themselves on the BRC with Jimmy gaining his first title.

New cars were coming along, the Triumph TR7 was now fitted with a V8 engine and eventually gained reliability with Tony Pond winning the 1980 Manx.  Vauxhall uprated their Chevette into the 2300HSR with improved rear suspension design, but the DTV Chevette project finished at the end of 1983.  1983 was the year of the Audi in Britain with Stig Blomqvist winning four of the six events, retiring on the other two, ending the season three points ahead of Russell Brookes’ reliable Chevette 2300HSR.  By the end of the year another car made its debut, the Opel Manta 400 in which Henri Toivonen and Ari Vatanen finished 1-2 on the Manx Rally.

The onward technical advances saw Audi’s short-chassis Sport Quattro winning the 1984 Ulster Rally in the hands of Walter Rohrl, while Mikkola won three of the rounds in the long chassis car.  McRae won the 1984 title with a Manta 400, and Brookes did the same with a Manta 400 in 1985.  The manufacturer and importer interest was as boyant as ever, 1985 attracting entries run or supported by Audi, GM, Skoda, Austin Rover, Fiat, Nissan, Toyota and Peugeot.  This was the season of Malcolm Wilson’s big career gamble, in which he acquired and privately ran a Quattro and won all the three gravel rounds of the championship.  McRae won the all-asphalt Circuit of Ireland controversially, because fellow Manta drivers were told to slowdown, as a win for McRae would boost his aspirations in the European championship.

1986 was a year full of emotions, with reports of the tragedies from the world championship inevitably casting doubts how long the dramatic cars would be allowed to run in the British series.  It was a special year with Mark Lovell representing Ford in their RS200, David Llewellin and Jimmy McRae driving Metro 6R4s, Hannu Mikkola in a Sport Quattro, and Michael Sundstom driving a Peugeot 205T16, all vying against the established Manta 400 driver Brookes.  Lovell and Brookes were the most consistent drivers of the series, with Lovell winning the last three rounds of the series and pulling into an unassailable lead.  The FISA (the world motorsport’s governing body) meanwhile ordered that no stages could be won at more than 110kph, meaning that many of the stages on the Ulster and the Manx Rallies were achievable with specific target times, even after organisers inserted artificial chicanes.

Meanwhile even more fundamental decisions were being made for the BRC.  For 1987 only cars in Groups A and N, plus the still acceptable small engined Group B cars could compete.  The newly homologated rear-wheel-drive turbocharged Ford Sierra Cosworth cars were lined up against Audi’s recently introduced four-wheel-drive normally-aspirated Coupe Quattros while the old style Opel Manta 400s remained unaffected.  The popular Metro 6R4s were allowed to compete in the Marlboro Autosport RAC National championship in detuned form.  Events were still as tough as ever, with the stage times for the winners often well over three hours.  At this time the traditional secret forest route nature of the sport came under serious threat and the breakthrough came with the Scottish Rally, the first time that pacenotes could be used in British forest rallying, the end of the era.  It had nearly happened in 1987 but for 1988 it was permitted, starting off with a restricted form of reconnaissance with all the drivers in a one-time convoy, one behind the other.  This was a fundamental step forwards, ending the suspicions of cheating and of the perceived advantage of local knowledge – not that this was valid given the success of foreign drivers beforehand.  Ironically 1988 was to be the only time the Scottish driver Jimmy McRae won the Scottish Rally.  It was two more years before Rally GB (which had dropped out of the BRC after 1977) also allowed reconnaissance.  The BRC meanwhile was stepping up again.  In 1989 Llewellin’s Toyota Celica ST165 won the opening round of the series and took the title at the end of the season.  The ‘nineties were coming up fast with new drivers, and midway through the decade a major change of direction so far as the cars were concerned. 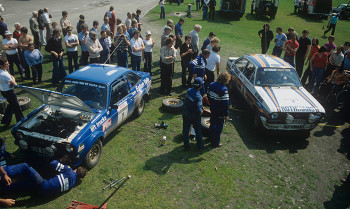 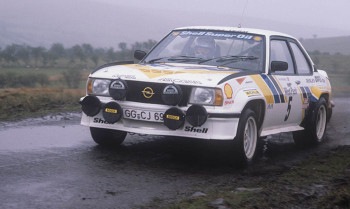 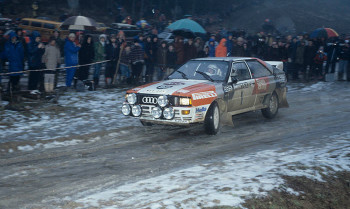 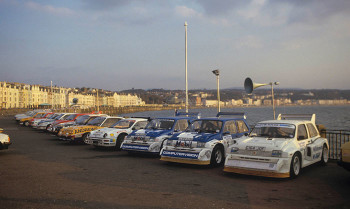 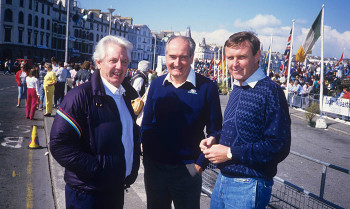 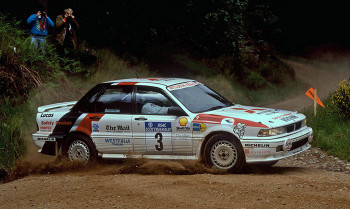